The company is currently being headed by David and Dominique, a complementary and visionary team. The up-to-date machine park demonstrates Dominique and David's ongoing tendency towards innovation. In addition to the Belgian market, the company exports its products to such countries as France, Ireland, the UK, the Netherlands, Sweden, Spain, Germany, Lithuania, Russia, Belarus, and Indonesia.

Decof has been a board member of the F.E.I.B.P. since 2015 and, in this capacity, guarantees the quality of their premium brands. FalconBrush Hygienic, established in 1988, is distributed worldwide.

In 2006 David Decoopman, the youngest son of Dirk, joined the Falcon Brush team as a Financial and Production Manager. Dirk Decoopman decides to entrust his sons with the full-scale management of the company in 2009.

Dominique Decoopman, the oldest son of Dirk Decoopman, becomes Sales Manager in 1996. He focuses primarily on exports to France, concurrently bringing the Avant Garde and Safebrush range of to the market 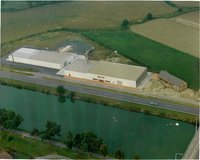 The new generation of managing directors, Dirk and Hans Decoopman, order the construction of larger production facilities along the Roeselare-Ooigem Canal in 1988. They purchase the first CNC machines, which perfectly illustrates their propensity for innovation. More and more products are developed for the cleaning industry and professional markets such as the food, the professional cleaning and other industries. Falcon Brush is launched and quickly becomes one of Decof’s premium labels.

The P. Vandommele company is acquired in 1954 and continues under the name Decof bvba. Antoine and Valère Decoopman take over the day-to-day management of the company in 1964. Decof bvba specialises in the production of brushes made from Chinese pig bristles. Export is once again directed at the British market.

In 1924 Achilles Decoopman and his family establish A. Decoopman-Vandeginste & Zonen. Until 1939 the products are sold primarily on the British market. The brand name ‘de valk - le faucon’ (the falcon) is used as the brush label.